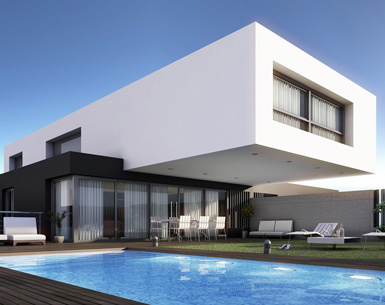 Light Steel Framing is an industrialised constructive system with origin in the USA that has gained prominence in the construction market in Portugal. Due to the various advantages it offers, it is a system widely used in countries such as the USA, Canada, Australia, South Africa, Japan, and many European and South American countries. The Light Steel Framing system is characterized by a light structure of galvanized steel profiles, which work together to support the building. This structure is complemented by OSB plates or cementitious plates, bolted directly to the structure profiles.The Light Steel Framing system enables buildings to have the same final appearance of conventional construction, but with technology, resistance and sustainability like no other.

The Light Steel Framing system is able to answer to any architectural need, so it is possible to use it in various types of buildings, including houses, schools, hospitals, shops, façades and roofs. Because it is a system with low weight, it is widely used in building renovation.

Light Steel Framing has a much smaller weight than conventional masonry construction. This considerably reduces the loads at the foundation, generating savings at this stage of the work that can reach 70%. The ground floor slab, in reinforced or prestressed concrete, is the solution in most cases.

The structure of light steel buildings is made up of type U and C light galvanised steel profiles that are designed, calculated and manufactured with strict technical control. Each piece of the structure assembled by Bloken is manufactured in the exact dimensions, with precise fittings and cuttings to suit each building, eliminating the waste of material and increasing the efficiency and speed of assembly.

The coating of the Light Steel Framing structure is made of OSB structural wood plates, bolted directly to the structure profiles.

In order to improve the thermal and acoustic performance of the building walls, double-layer mineral wool blankets are used inside the walls and ceilings. The interior walls are then coated with plasterboard — which is hydrophobic in the wet areas — and the outside walls with thermal insulation.

The technical installations in the LSF system are designed and executed following the same principles and materials used in conventional buildings, but with an ease of installation far superior to the traditional ones.

The Light Steel Framing system results in buildings with a final appearance equal to that of conventional construction.

The advantage lies in a system that integrates technology, strength, sustainability and performance superior to the conventional, without neglecting the durability of the building.

The architecture combined with the materials and the building system give Bloken buildings a high level of thermal and acoustic insulation.

The expedited process of LSF (Light Steel Framing) construction system allows to reduce the execution time of the work by about 50%. With Bloken it is easy and simple to build, the LSF steel profiles fit as planned.

Light steel framing is extremely durable and superior to any other construction method, having a service life of several hundred years.